skip to main | skip to sidebar

A local newspaper in my town shockingly wrote a negative op/ed piece on the Tea Parties. Well, to be fair, they are a newspaper so I wasn't really shocked, but I responded. At the end of my mini-rant you will find a link to the story.

Wow, I'm not sure Mr. Riehl attended the same 4,000 to 5,000 group at the Oceanside Tax Day Tea Party. This wasn't a group of professional protestors, the majority were self-professed rookies. This group wanted to voice their dissatisfaction of HOW their taxes were being spent. Most of these attendees work and accredit themselves as the silent majority. If you went to this event you would see that these tax-paying people are tired of doing the right thing, paying mortgages, taxes, bills and seeing entitlements are on the rise. Why continue doing the right thing if you are going to get nothing from it. These people are already paying towards their social security benefits that Mr. Reihl claims they will all accepting in their golden years. Even though there is much debate if enough money will be there to pay seniors in 20 to 30 years. I feel your paper's opinion piece misses the point of this grassroot cause and as we all see across the country newspapers are unable to sell their papers. Bankruptcy and loss revenues will continue to plague News organizations if they don't listen to what consumers really want. Just the facts or as I knew it in Journalism 101! 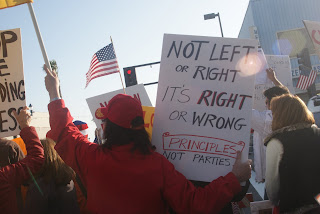 An average sign at this Oceanside, California Tea Party.
Posted by kimberlydvorak at 5:19 PM No comments:

It Was All About The Tea

The sea of protestors reached four blocks in length. It was an extremely windy and angry day in San Diego, traffic on the freeways were slower than usual and the wind made for chillier weather, however, that didn’t stop the protesters. Despite what the mainstream media pushed, these protestors were optimistic. Yes, optimistic.

“It’s great to see all these people out here who really care about their country,” said Bob Thomas of Encinitas. “I think all these people get it. It’s not about the taxes necessarily, but how our government is spending our tax dollars.”

Oceanside PD said there were 4-5,000 in attendance and no problems were reported. Not even a traffic ticket. The local police stated they were actually on the look out for counter-protestors trying to stir up trouble – none showed.

The throngs of tea party supporters were treated to a well organized event that shut down Pacific Coast Hwy for more than an hour. A large semi dump truck, filled with ‘large old-style tea bags’ led the way to the beachside dumping grounds.

The crowds chanted “U.S.A." and “stop the spending,” while making the five block trek to the beach. Endless patriotic cheers echoed throughout the congenial crowd, ranging in age of nine months to 90 years, as they marched from Oceanside City Hall to Oceanside pier and finally onto the beach.

Despite what some partisan politicians are saying after the event, there was nothing Astroturf about this event, says co-founder of http://www.stoptaxingus.com Gary Gonsalves, MD. Point in fact. There were no politicians allowed to speak. “If the mainstream media bothered to come out and talk to the crowd in a non-hostile manner, they would find out that it is ‘them who don’t get it,’” Gonsalves said. He also echoed the fact that the media generally leans liberal left.

The basic premise of the day was to note this government spending madness has to stop. “If the politicians don’t stop to listen to us, the 2010 elections will see a lot of change. Every incumbent will find themselves out of a job. People who are working fulltime and sometimes two jobs and don’t have time to get involved are hopping mad and promised to get out the vote to change things,” repeated many attendees.

“I’m part of a union here in San Diego and I’m mad. They are no longer working for the members, they are working for themselves,” stated David Gonzales. “It’s time they wake up and smell the coffee because what they are brewing is plain wrong.”

Gonsalves said there were many union workers in attendance because the leaders don’t respect the workers anymore. “Our organization StopTaxingUs.com members are made up of common people, who have a budget and have to work to meet the monthly demands.”

“I co-founded the group about a year ago and came up with the ‘silent majority’ philosophy,” Gonsalves said. “I just wanted to give some focus and a voice to those who do have busy lives and have decided to take a stand on fiscal conservancy.”

“We had politicians and their representatives call us, but we explained that we were tired of the lack of response to our calls and emails over the past couple of years. We also told them they were welcome to come as supporters but not speakers,” according to Gonsalves. Some did show up, but it was clear the organizers didn’t want to name names.

A concerned taxpayer, Marian Frick said the event provided a great outlet for many frustrated citizens who aren’t buying what’s told to them on the evening news. “I can’t believe that so many well-educated people believe in this utopian idea, where is the money going to come from?” Furthermore she went on to point out that if these people and politicians really believe everybody can have a perfect life that maybe they should donate all their hard-earned money to the government.


The organizers vowed this was only the beginning and not the only protest planned. The main focus for the next few weeks will be to fix California’s problems and defeat propositions 1A-F.

“We had more than 100 volunteers at the rally who are committed to get the vote out. Without them we wouldn’t be able to put on such a smooth event,” a grateful Gonsalves said. “I’d like to give a special shout out to Rhonda Deniston our Oceanside regional manager.”

It was also clear that it wasn’t about right or left-it was about what is American. “This isn’t about Republicans or Democrats, because neither party is listening to what mainstream American is saying,” said local organizers at the end of the rally.
Posted by kimberlydvorak at 4:18 PM No comments:

Read my articles at http://www.examiner.com/x-10317-San-Diego-County-Political-Buzz-Examiner

kimberlydvorak
Freelance Writer searching for answers in a crazy world